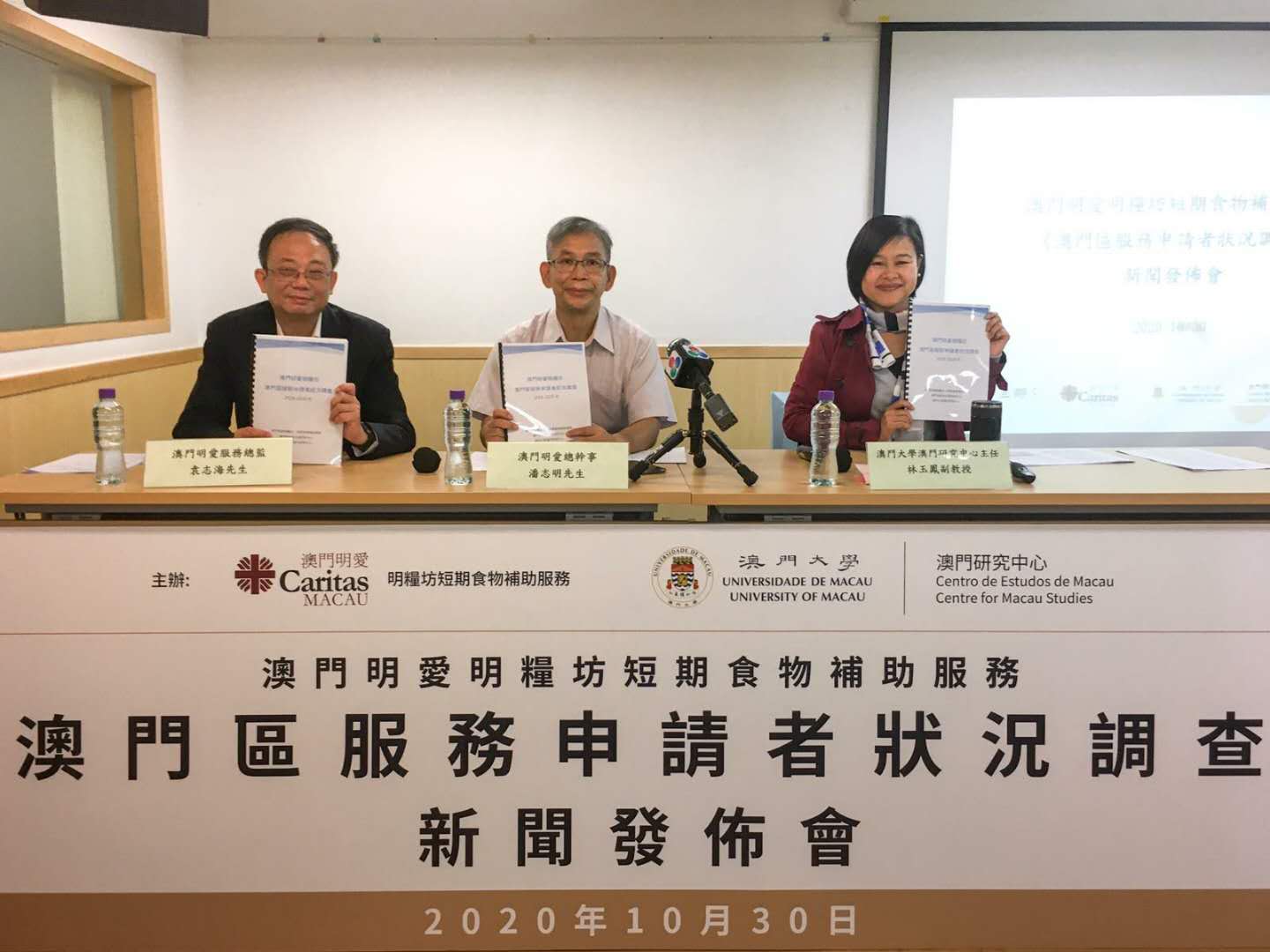 The ‘Survey on the Situation of Applicants for Services in Macau’ on Macau Food Bank was jointly conducted by the Mother Mary Social Studies Centre of Caritas Macau and the Centre for Macau Studies of the University of Macau. A press conference was held at the auditorium of Centro de Serviços Integrados de Apoio à Família — Fonte de Alegria e de Energia on 30 October. The Director General of Caritas, Mr Paul Pun Chi Meng, Service Director, Mr Philip Yuen Chi Hoi, and Director of the Centre for Macau Studies, University of Macau, Ms Agnes Lam Iok Fong, introduced the findings of the study. Based on the findings of the survey, four recommendations were made: ‘establish a community canteen’, ‘strengthen outreach work to identify hidden cases of mental health problems in the community’, ‘deepen health education’ and ‘develop pain management services’.

To obtain insightful understanding of housing, health, willingness to receive assistance, and use of personal social networks of the Centro do Serviço de Fornecimento Temporário de Alimentos da Caritas, the Center for Macau Studies of the University of Macau and Caritas Macau jointly conducted a survey, namely, “The Study on the Applicants’ Status of Caritas Macau Food Bank”. The study has been divided into two phases, the first phase being targeted to complete a survey of service users of the Seac Pai Van Service Centre in 2018.

Amongst all the respondents, 62.1% were over 65 years old, most of them being retired and having no jobs for more than two years. About 12.2% of all interviewees were full-time employees.  Most of the source of income was pensions from the social security fund. 69.1% of the households had an average monthly income of less than MOP 7,000. The most important expenditure was food and medical care. Most people agreed that the income can still cover the expenses; 30.0% believed that the income was insufficient. In terms of the distribution of residences of those service users being interviewed, 79.0% of them are mainly living in the northern district of the Macau Peninsula, including Fai Chi Kei District, District of Ilha Verde, District of Tamagnini Barbosa, and District of Areia Preta. Nearly half of the respondents lived in social housing. The applicants’ residencies will be relatively grouped and concentrated in the northern district of the Macau Peninsula,  an area  mainly covered by  social housing.

In terms of physical and mental health, 53.2% of the respondents claimed that they suffered from poor health. Half of the applicants were in poor mental condition, 18.2% needed treatment for depression. More than 75% of the respondents reported that they “feel tired or unenergetic” in the past two weeks, “being difficult to fall asleep, easy to awake or sleep too much”. More than 60% of the respondents expressed that they “felt down, frustrated or depressed”, “lost passion and interest in doing anything”. More than 50% of the interviewees “had difficulty in concentration, particularly when reading newspaper or watching TV”, “felt bad for oneself-or finding oneself a failure, or letting oneself or his/her family feel disappointed”, “movement or speaking speed is so slow that others are aware of it, or behaved irritably and being unable to calm down”, “always with poor appetite or eating too much”, and 15.6% of the respondents said they had the suicidal tendency. 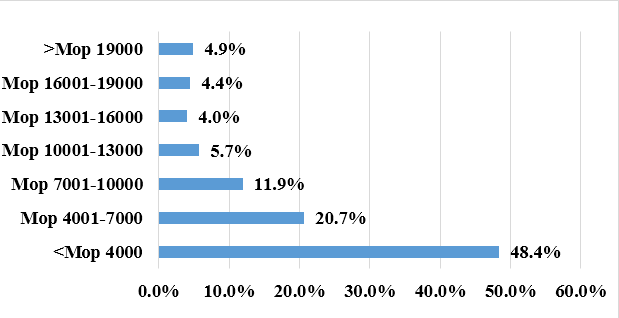 The average monthly household income of the respondents (MOP) (N=697) 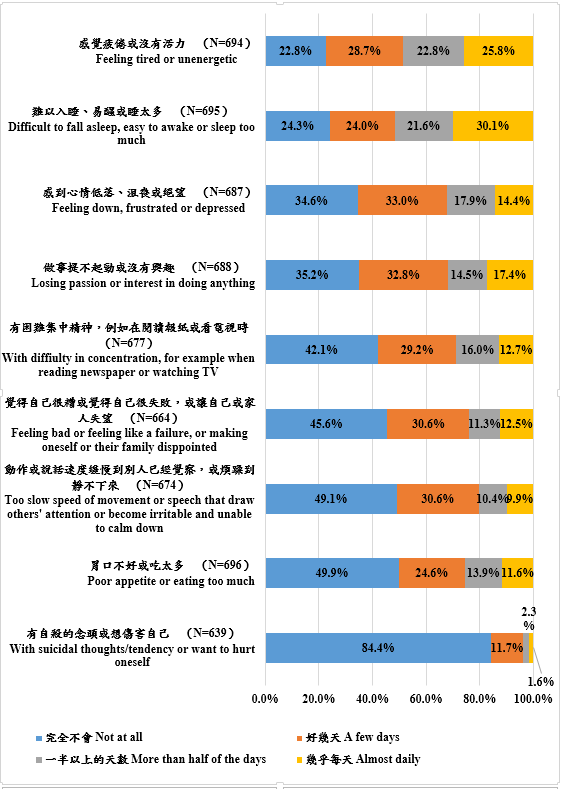