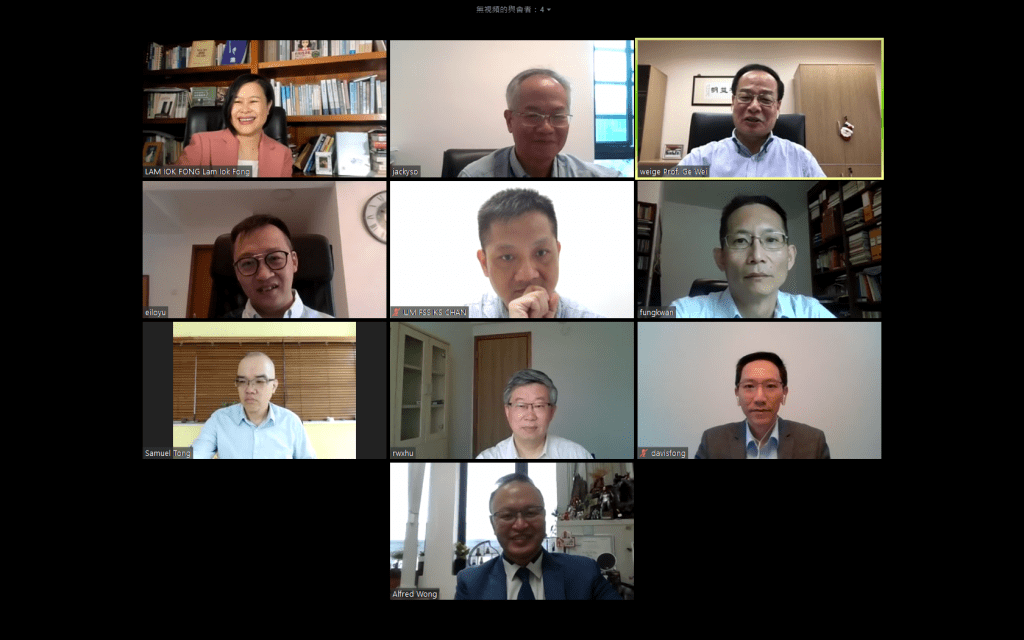 The Centre for Macau Studies (CMS) of the University of Macau (UM) held an online seminar on the Macao SAR government’s policy address for the Year 2020 on 22 April, which is the first policy address of the fifth leadership of the Macao SAR government by chief executive Ho Iat Seng. As per its usual practice, after the chief executive gave the annual address, the centre arranged for experts and scholars to discuss and analyse the policy’s content in order to provide opinions to the government for reference. Because of the epidemic, this year’s seminar was held online for the first time in the university’s history.

The forum was chaired by Agnes Lam, director of the CMS. During the seminar, participants generally expressed a positive attitude towards this year’s policy address, which they believe focuses on responding to the epidemic and stabilising the economy, while being progressive and realistic for the city’s future development.

According to Ge Wei, vice rector (research) of the University of Macau, sustainable development of higher education calls for industrialisation, which involves the recruitment of top-tier scholars globally and more non-local students. This is of great significance to increasing the overall quality of higher education in Macao. He also points out that the merger of the Higher Education Bureau and the Education and Youth Affairs Bureau is conducive to higher education development in the SAR. He notes that this year’s policy address also touches on smart city development, digital government, water management, and civil servant training. UM has set up relevant state key laboratories and research centres in these areas and will fully cooperate with the SAR government and assume its responsibility as a public university to contribute to this region or beyond.

In terms of public administration, Hu Weixing, dean of the Faculty of Social Sciences (FSS), says the policy address presents some thoughts on promoting reforms, covers some of the deep-rooted issues in Macao, and highlights public administration, legal reform, economic diversification, social structure, and regional collaboration. However, Prof Hu believes that to successfully implement these reforms, it is necessary to clarify the relationship between power and responsibility. Eilo Yu Wing Yat, an associate professor in the Faculty of Social Sciences (FSS), says that in a refreshing departure from previous focus on ‘cash handout’, this year’s policy address resumes a more ‘rational’ discussion on livelihood issues. However, in terms of public administration reform, it is mostly just a rehash of the old rhetoric, and interdepartmental collaboration will remain as a challenge for the government. Prof Yu adds that in the past, policies proposed by the government usually took a long time to implement; he hopes the government can make improvements in this area and attach greater importance to communication and collaboration with the people.

Kwan Fung, an assistant professor in the Faculty of Social Sciences (FSS), says that one cannot discuss the issue of economic diversification in Macao without discussing the gaming industry, which is however not given much emphasis in the policy address. Dr. Kwan believes that some information on gaming licenses should be released, because the gaming licenses, gaming industry, and economic diversification in Macao are all closely related. Dr. Kwan also suggests that the SAR government should create a timetable for implementing legal reforms, which should specify which laws should be reviewed and revised, as well as when and how to amend them, in order to increase efficiency.

Lok Wai Kin, a professor in the Faculty of Law (FLL), says that the policy address proposes six sets of conceptual relationships, namely ‘one country’ versus ‘two systems’, ‘Macao’s development’ versus ‘mainland’s development’, ‘economic diversification’ versus ‘single-pillar economic structure’, ‘nurturing local talent’ versus ‘attracting non-local talent’, ‘economic growth’ versus ‘people’s livelihood’, and ‘reform’ versus ‘stability’. Prof Lok believes that whether these relationships can be handled properly is a test of the SAR government’s governance capacity. In terms of legal reform, Prof Lok believes that detailed and reasonable planning is important, and the improvement of laws cannot be achieved without the improvement of the economy and people’s livelihood.

Davis Fong Ka Chio, director of the Institute for the Study of Commercial Gaming (ISCG) of the University of Macau, says this year’s policy address boldly puts forward some projects that has for a long time remained merely ideas, including extending the free port policy, calculating the percentage of Hengqin’s GDP attributable to Macao, and registration-related issues in Chinese medicine, which will all help the long-term development of Macao but require national support in order to succeed. Jacky So Yuk-chow, a chair professor in the Faculty of Business Administration (FBA), says that Macao’s heavy reliance on the gaming industry is both a disadvantage and an advantage. Prof So believes that Hengqin can play an important role in the diversification of Macao’s economy, as Macao can set up financial institutions in Hengqin to handle bonds, RMB settlement, and other related transactions. He believes that with a clear positioning plan, the financial industry will have great potentiality in Macao. However, Prof. So also warns that as the government is vigorously trying to boost consumption, too much hot money may cause some economic problems.

Samuel Tong Kai Chung, president of the Macao Political Economy Research Association, believes that the “Individual Visit Scheme” in mainland China may not be able to immediately promote economic growth in Macao as expected after the epidemic comes to an end. A major problem facing Macao is its small scale of economy, and economic diversification does not equal industrial diversification. Dr. Tong believes that to achieve economic diversification in Macao, regional collaboration is necessary, and the most feasible way to do this is to collaborate with Hengqin. He says that Macao should also establish more agreements for regional collaboration with mainland China and foreign countries.

Zhu Shoutong, interim director of the Centre for Chinese History and Culture (CCHC) of the University of Macau, believes that this year’s policy address combines talent exchange with promoting cultural diversity, which is a new way of thinking about promoting cultural diversity. According to Prof Zhu, Chinese culture is the mainstream of the variety of cultures in Macao, and promoting Chinese history and culture should be pursued from the perspective of nurturing local talent and attracting non-local talent. Alfred Wong Seng Fat, an associate professor in the Faculty of Science and Technology (FST), believes that the epidemic has highlighted the inadequacy of smart city development in Macao as many public services are still in-person services. Similar to Typhoon Hato, the epidemic is testing the resilience of the city. Regarding problems in public transport, Prof Wong believes that the solutions lie in collaboration between urban planning, urban renewal, and smart city development. Chan Kin Sun, an assistant professor in the Faculty of Social Sciences (FSS), says that a unified mechanism for releasing information should be established in all cities of the Greater Bay Area. Dr. Chan also believes that some social services, such as smart pension and precise pension, should be included in smart city development, because they can help improving the quality of social services.