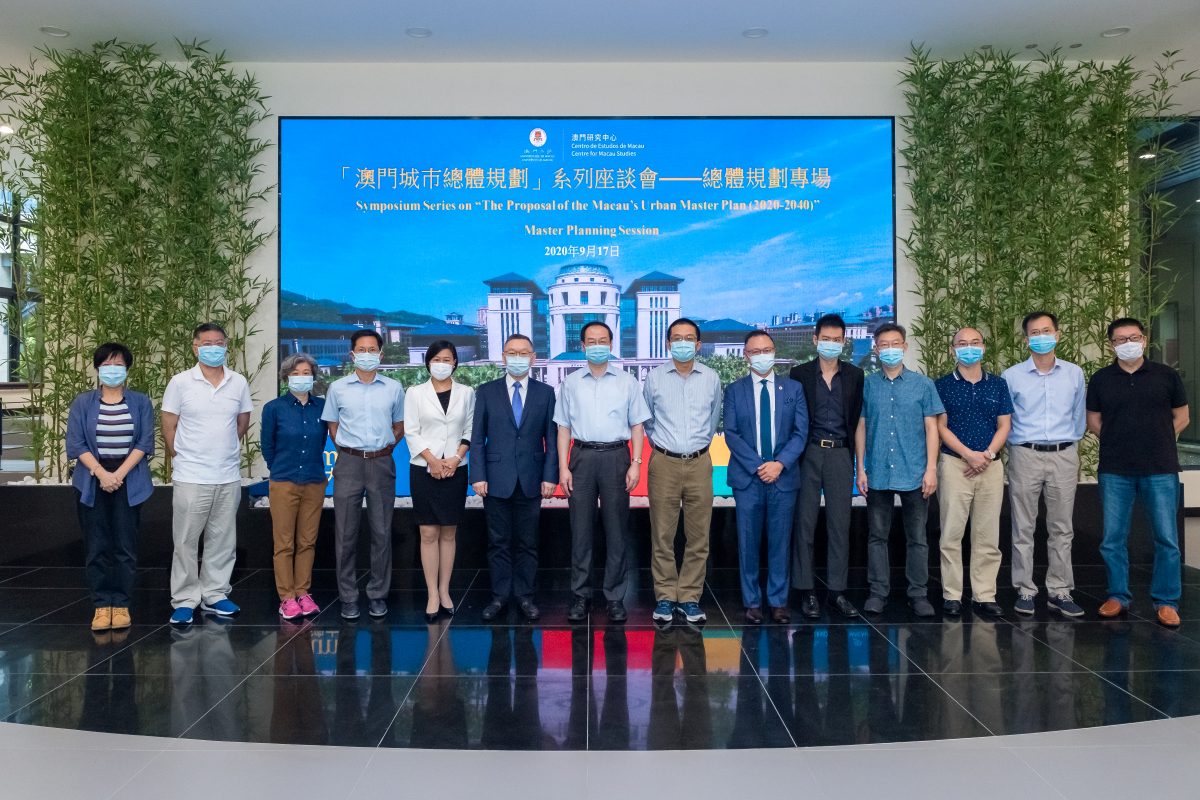 The Centre for Macau Studies of the University of Macau organized a symposium series on “The Proposal of Macao’s Urban Master Plan (2020-2040) – Master Planning Session” on 17 September 2020. Several experts and scholars have been invited from various fields to discuss “the Proposal of the Macao’s Urban Master Plan (2020-2040)” (Hereinafter referred to as “the Proposal”) to share their opinions and suggestions. The symposium was chaired by Prof. Agnes Lam, Director of the Centre for Macau Studies of the University of Macau. All participating experts and scholars shared their views and analysis on the proposal from different perspectives and they have come up with a general consent on the importance of the master plan for the future development of Macao. In his opening speech, Prof. Wei Ge, Vice Rector of the University of Macau stated that the master plan is related to the development of Macao in the next two decades. Serving as an international comprehensive public university, the University of Macau is responsible for gathering all experts and scholars and to carrying out insightful discussion on the content of “the Proposal”. With such a major master plan involving huge amount of cross departmental cooperation, Prof. Ge agreed that “the Proposal” mentions the establishment of a “cross-departmental committee”, and the committee can coordinate and follow up the works related to the preparation of the master plan in order to implement the goals in different areas in “the Proposal”.

Dr. Sai Peng Chui, President of the Macao Urban Planning Institute, pointed out that Macao will be divided into 18 districts in “the Proposal”, while the allocation of resources and community facilities, such as the health centers being allocated in various districts, must be taken into consideration. The current land use is based on different criteria such as “Division Guidelines”, “Planning Condition Map”, “Macao General Regulations”, and “National Standards”, which are likely to cause overlapping functions, and it is necessary to consider the issues of merging, division and utilization. Regarding the flexible land use, Dr. Chui believed that the international “transfer of land development rights” is one of the methods that can be referred to. In addition, Dr. Chui also mentioned that by means of this master plan, the Macao’s Urban Master Plan can be connected to the 85 square kilometers of territorial water area, which will be more beneficial to the future development. Prof. Li Sheng, Associate Dean of the Faculty of Social Sciences of the University of Macau, said that Macao has the right to manage 85 square kilometers of sea area, but it is necessary to seek official approval from the central government for reclamation or utilization. If this issue can be considered in “the Proposal”, it will help to save a lot of time. Prof. Sheng also mentioned that “the Proposal” cannot be a dream of the future, it should be built on solid basics. It is necessary to dig out some core issues that need to be dealt with urgently, to obtain the social consensus and to resolve the issues in “the Proposal”.

Dr. Rui Leao, President of Docomomo Macau Association, said that it is a good thing to have some common issues being stated in “the Proposal”, which is about resolving the overcrowding and also the concern of lack of leisure space in Macao. However, there are some issues that may require more attention, such as the preservation of cultural heritage of Macao. the planning of the reserve and buffer zone generally still following the standards of the 1980’s and needing to be updated urgently, otherwise many precious buildings in Chinese-style will be demolished soon, and to deal with the population migration problem along with the activation project of the inner harbor district. Dr. Francisco Vizeu Pinheiro, Assistant Professor of the University of Saint Joseph, mentioned that if the land is unusable for the traffic and population issues in the Inner Harbour District , it can be resolved by bridges. In terms of solving the housing problem, he believed that obtaining land in Hengqin is a very good idea. Of consideration options, Prof. Alfred Seng Fat Wong, Associate Professor of the Faculty of Science and Technology of the University of Macau mentioned that in terms of disaster prevention and mitigation facilities, the tide barriers mentioned in “the Proposal” are all existing plans, and the 20-year plan requires some more forward-looking ideas. For example, the coastal area of the Inner Harbour District is slightly reclaimed to resolve the problem of water seepage in the dike and dams. The use of environmentally friendly energy sources such as electric buses requires consideration of the loading issue of the power supply system, and the topic of construction of smart city has not been mentioned much in “the Proposal”.

Prof. Tak Wing Ngo, Professor of the Faculty of Social Sciences of the University of Macau said that the introduction of the Urban Master Plan is a positive initiative for Macao. However, there were more descriptions of the current situation and lack of forward-looking plans. Overall, “the Proposal” favors land use planning rather than urban planning. Market planning focuses on space and lacks functional planning such as transportation, energy, and waste treatment. He believed that the issue of renewal of gaming concession licenses should have a very important impact on the planning of the entire tourism and leisure area and many districts. This should not be ignored. Prof. Sou Kuan Vong, Associate Professor of the Faculty of Education of the University of Macau stated that the Macao’s Urban Master Plan focuses more on area and space, however the interaction between people and space is a more important function of a city. As an educator, she believed that the social environment itself is the most direct educational space. It can affect the behavior of young students, but she found that the “the Proposal” lacks educational content, and she hoped that in the coming stages of consolidating data collection and concluding “the Proposal”, more feedbacks and opinions should be collected from the education sectors and the voices that are concerned about the building the humane environment can be added. At the same time, she believed that “the Proposal” needs to pay attention to the dynamic growth of the population, especially the impact of the increment of the population of different ages on the community facilities, otherwise it will not be able to fulfill to the future development and need.

Prof. Jingming Yao, Head of Department of Portuguese, Professor of Faculty of Arts and Humantities of the University of Macau, raised his concern about the destruction and conservation of Macao’s  landscape. He believed that the construction of new buildings should take into account the harmony with the environment and the landscape, and hoped to be reflected in the general regulations; in terms of environmental protection, the Macao  SAR government can be more active about sewage, garbage and other issues, and use some more innovative methods, such as partnering with Hengqing instead of reclamation land. Prof. Jianhua Xu, Head of Department of Sociology, Associate Professor of Faculty of Social Sciences of the University of Macau, said that the  Macao’s Urban Master Plan should consider the impact of some major social and industrial developments, such as the industrialization of higher education, because it could be foreseen in the process that more issues regarding accommodation or traffic and other problems will be brought up from time to time. It’s too late to wait until the problems arisen. Prof. Ting Chi Matthew Liu, Director of Centre for Continuing Education and Professor of Faculty of Business Administration of the University of Macau said that “the Proposal” needs to focus more on transportation, smart city, environmental protection and other issues in order to build Macao  into a “happy, smart, sustainable and resilient” city.  It is necessary to consider top-level design, laws and regulations, and public governance, and actively listen to the opinions of the public. If some plans need to be implemented, professional data can be used to convince the public in advance.

During the meeting, the experts and scholars also mentioned the issue of indicators. They believed that “the Proposal” lacks some regional or project indicators, such as a certain area configuration, road area, population density, traffic flow, green area ratio, etc. It is necessary to clarify that there are different levels of indicators:  high, medium and low. There cannot be only the lowest indicators. If there are no data and indicators, the goals may only become a fantasy.